Deprecated: array_key_exists(): Using array_key_exists() on objects is deprecated. Use isset() or property_exists() instead in /var/www/wp-content/plugins/fusion-builder/inc/helpers.php on line 243
 8 Facts About Love and Marriage in America – Relational Renewal Skip to content

8 Facts About Love and Marriage in America

BY ABIGAIL GEIGER AND GRETCHEN LIVINGSTON

The landscape of relationships in America has shifted dramatically in recent decades. From cohabitation to same-sex marriage to interracial and interethnic marriage, here are eight facts about love and marriage in the United States.

1  Love tops the list of Americans’ reasons to marry. 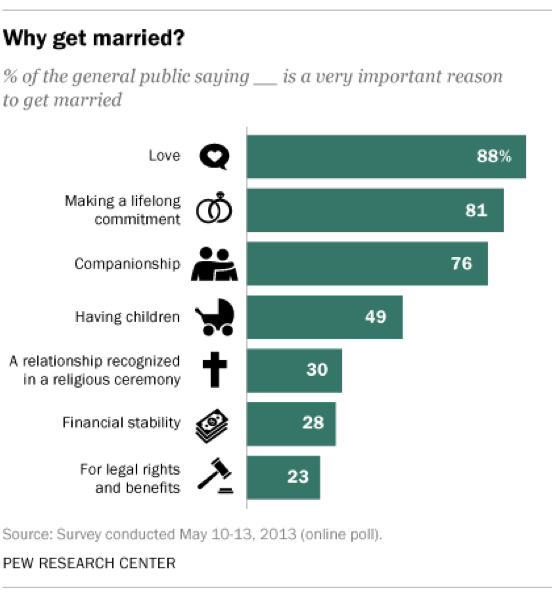 About nine-in-ten Americans (88%) cited love as a very important reason to get married, ahead of making a lifelong commitment (81%) and companionship (76%), according to a 2013 Pew Research Center survey. Fewer said having their relationship recognized in a religious ceremony (30%), financial stability (28%) or legal rights and benefits (23%) were very important reasons to marry.

However, being a good financial provider was seen as particularly important for men to be a good husband or partner, according to a 2017 survey by the Center. About seven-in-ten adults (71%) said it was very important for a man to be able to support a family financially to be a good

husband or partner, while just 32% said the same for a woman to be a good wife or partner.

As far as what helps people stay married,  married adults said in a 2015 survey that having shared interests (64%) and a satisfying sexual relationship

(61%) were very important to a successful marriage. More than half (56%) also named sharing household chores.

2  Half of Americans ages 18 and older were married in 2016, a share that has remained relatively stable in recent years but is down 9 percentage points over the past quarter-century. 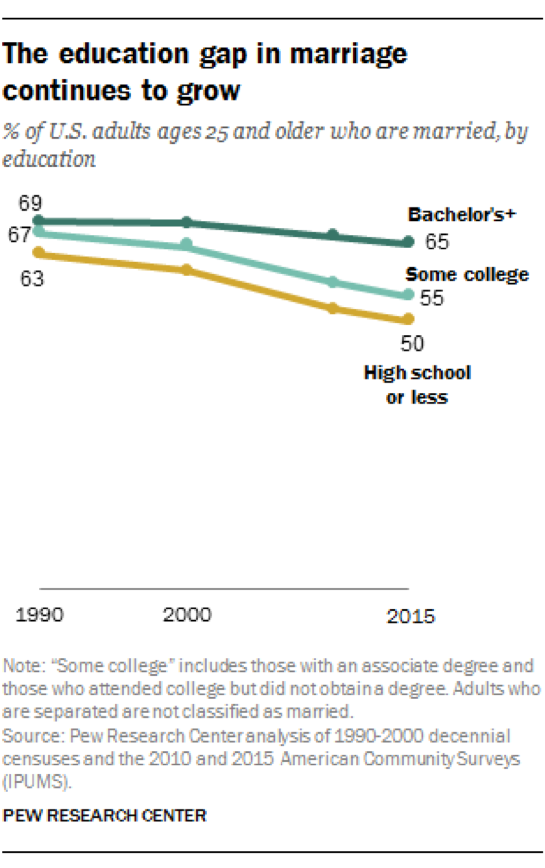 One factor driving this change is that Americans – particularly men – are staying single longer. According to the U.S. Census Bureau, in 2017, the median age at first marriage had reached its highest point on record: 29.5 years for men and 27.4 years for w

Marriage declined most among those with a high school diploma or less education. In 1990, 63% of this group were married; by 2015, that had dropped to 50%. In contrast, 65% of those ages 25 and older with at least a four-year college degree were married in 2015.

As the U.S. marriage rate has declined, divorce rates have increased among older Americans. In 2015, for every 1,000 married adults ages 50 and older, 10 had divorced – up from five in 1990. Among those ages 65 and older, the divorce rate roughly tripled since 1990.

3  The number of U.S. adults cohabiting with a partner is on the rise. 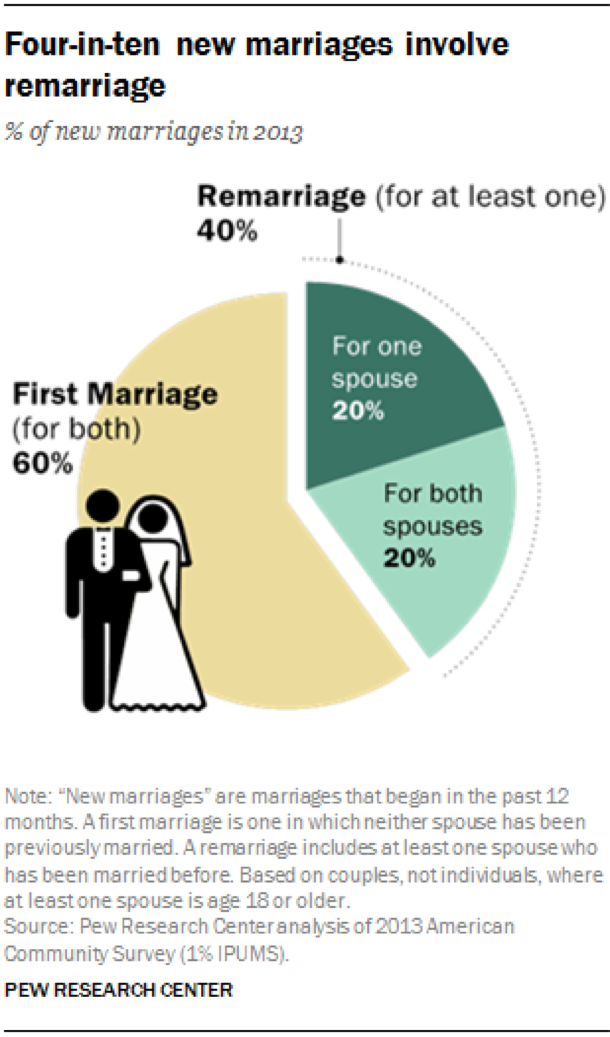 In addition to the half of U.S. adults who are married, 7% were cohabiting in 2016. The number of Americans living with an unmarried partner reached about 18 million in 2016, up 29% since 2007. Roughly half of the cohabiters are younger than 35 – but cohabitation is rising most quickly among Americans ages 50 and older.

4  Remarriage is on the rise. 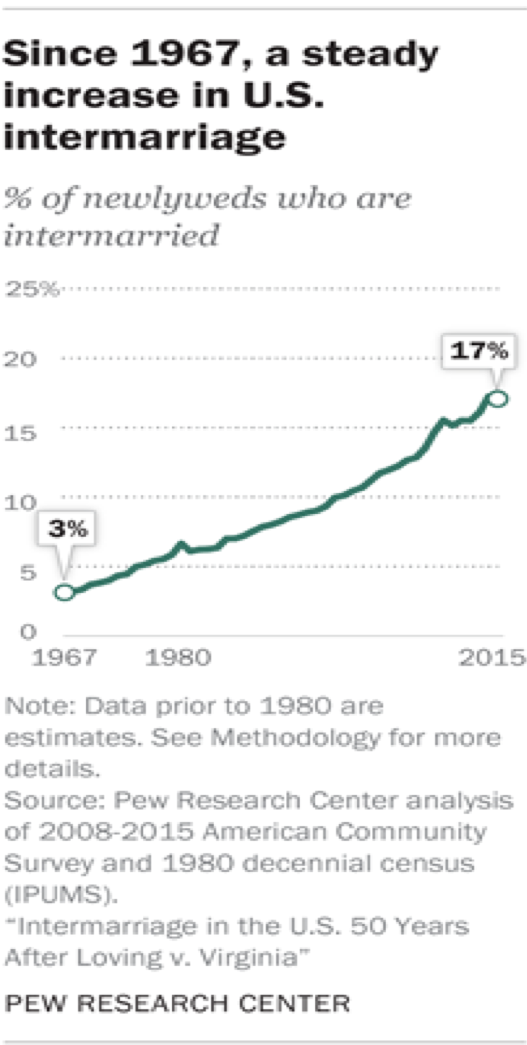 This reflects a steady increase in intermarriage since 1967 when just 3% of newlyweds were intermarried, according to a 2017 Pew Research Center analysis.

6  Public support for same-sex marriage has grown in the past 10 years. 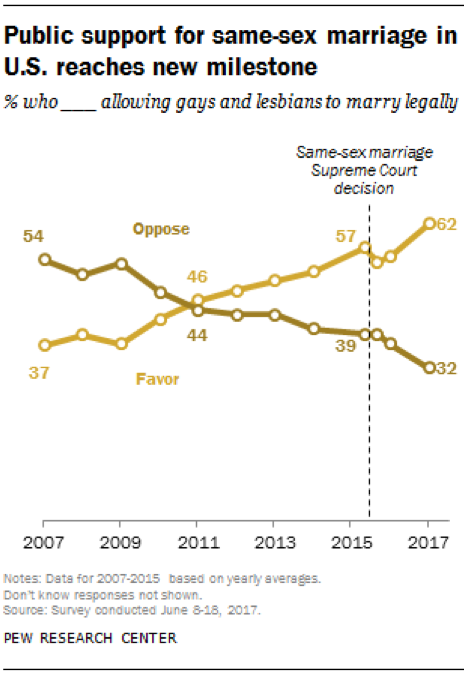 Surveys conducted by Gallup found that about one-in-ten LGBT Americans (10%) were married to a same-sex spouse in 2017. Now, a majority (61%) of all same-sex couples who live together are married.

7  Sizable minorities of married people are members of a different religious group than their significant other or identify with a different political party. 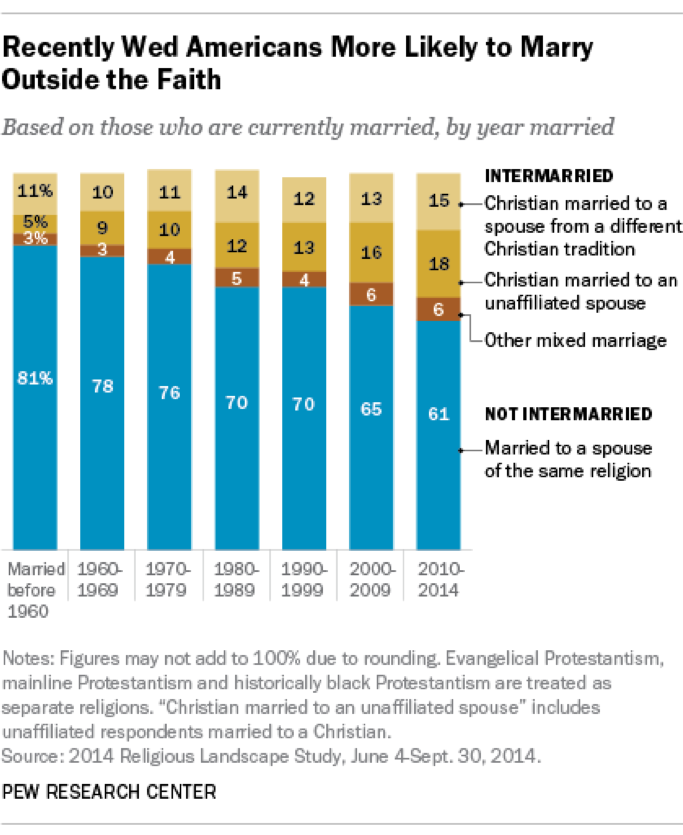 About four-in-ten Americans (39%) who have married since 2010 have a spouse who is in a different religious group, compared with only 19% of those who wed before 1960, according to a 2014 Pew Research Center survey. Many of these interfaith marriages are between Christians and those who are religiously unaffiliated.

For the most part, people today view online dating positively. About six-in-ten (59%) say it is a good way to meet people, and 47% agree that it is easier and more efficient than other ways of meeting people.

Gretchen Livingston is a senior researcher focusing on fertility and family